When you read those words, your imagination probably conjured up an image of a bird flying.  You pictured a bird from your memory, and you saw the image of how the bird was flying—soaring, flapping wings, swooping, etc.  This sentence gave your imagination complete freedom to determine the bird and its flight.

The bald eagle took off and soared across the sky.

This next sentence limited your imagination.  You now have to imagine an eagle as the type of bird and soaring as the way he was flying, but it still allowed your imagination to picture what the eagle looked like and how he soared.

The large, bald eagle’s body is dark brown with a white head and long, wedge-shaped tail.  Its razor-sharp, yellow beak is large and hooked.  The featherless legs have bright yellow feet with strong, short toes and long talons.  When it takes off, its seven-foot wingspan carries it high into the sky, where it catches a breeze and soars across the sky.  (Wikipedia)

This description limited what you could freely imagine about the bird, but it provided vivid details that helped your imagination see the bird as the writer intended.  This is the writer’s image of the eagle, not yours.

In the above three examples, the number of words and how vividly or minimally they described the eagle controlled your imagination. Sometimes providing too much description can often “crush the reader’s imagination,” according to Jerry Jenkins.

Words and the Imagination

One way we can experience stories is by reading them.   When we read, we aren’t seeing the actual letters and words in our mind’s eye.  We see the images of what the words represent.  According to Amanda Onion, “even though we are reading words, our brains recognize each word as an individual picture.”   “Imagination in reading involves the power of reproducing images stored in memory . . . to create new images that vitalize and animate the text,” according to Sadoski, Goetz, Olivarez, Jr, Lee and  Roberts.

In addition to mental imagery, we also generally “hear an inner voice speaking the words” in our minds, according to Christian Jarrett.   “Calvin S. Brown claims that ‘music and literature are intended to be heard,’ and that their . . . presentation is ‘the audible’ . . . because when we read we mentally hear the sounds.”

Words create images AND sounds in our minds.

Images and the Imagination

Another way that we can experience stories is by adding images to the text or watching videos/films of them.  When we look at this image of an eagle, we no longer need our imagination to picture it.  The image provides all of the vivid details of the bird.  This visual imagery does clarify how the writer in the previous description wants us to see the bird, but our imagination is then constrained by that image of the bird. 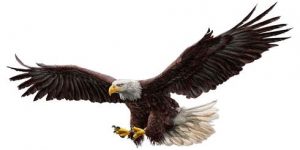 Watch this video of an eagle soaring, and you may notice that your imagination no longer has to work.  All of the details are provided for you, and you are merely a passive observer.  According to Bill Heid, “. . . well-done, graphically-strong visual stimulation . . .  does all the creative work . . . leaving NOTHING to the imagination and NOTHING for the brain to do!”

Jerry Jenkins adds, “The most common response to a movie made from a novel is, ‘The book was better.’ Why? Because the pictures evoked in our minds by the author’s words are far more creative than Hollywood can ever be.”

Although films do create visually and emotionally compelling stories, they do not create the same imaginative experience as reading or hearing a story.

When music is added to a video of an eagle soaring, the music now determines what emotions are conveyed.  In this case, the music is slow, ethereal, and eerie.  It creates a somber, somewhat mystical, feeling.

Here is another video of an eagle flying, but the music is hopeful, uplifting and inspiring.  It creates a joyful feeling.

The two types of music control how you feel about the story in the videos because music affects emotions–and you are able to decipher what the music is telling you to feel.  According to Colin Poitras, “Some scientists have theorized that music evokes emotion by tapping into deep rooted psychological constructs that have developed in our psyche as humans evolved over time.”

As we learned in the previous blog post “Can You Hear It?”,  19th century composers experimented with program music where they deliberately attempted to paint images of a story, scene or event in the listener’s mind.  Film music composers do the same thing. And it works.  If we listen to the sound track of a movie, the music helps our memory vividly recall those scenes from the movie, which often play in our minds like “mind movies.”

Music can, and does, create images in the imagination.

One difference in hearing a story versus reading a story is that we don’t have to go through the process of decoding the actual words on the page.  According to Linda Flanagan, “While books require readers to decode every word, stories told aloud free up the listener to connect with the story and the storyteller.”

Claire Armistead says that people have been listening to stories for far longer (150,000 years) than they have been reading them (5,000 to 7,000 years).  “So it’s possible that listening to speech (including such things as cadence, rhythm and intonation) is more spontaneously comprehensible and linked to emotional brain centres – hence more evocative and natural.”

Emma Rodero claims that audio is “one of the most intimate forms of media because you are constantly building your own images of the story in your mind.”  Bill Heid, believes that the “audio . . . allows the imagination to create its own ‘self-generated visual images and mental movies . . . .'”  When we are watching the mental movies in our mind’s eye, we can get lost in the story.  According to Jami Gold, “Story immersion is the sense that we’re not just reading words on a page—we’re experiencing the story . .  we might feel and see and imagine the story, or the real world around us might simply fade into the background.”

Is It All Connected?

When we read words, we see images and hear the sound of the words in our minds.  When we listen to music–especially film music–we hear sounds and see images in our minds.  Audio stories allow listeners to experience the story, and music allows people to feel the story.  When we combine audio stories and music, we are multiplying and intensifying the effect of the sounds, images and emotions in the listener’s imagination.

What Do You Think?

Try this experiement.  Go to the Eagle Story.

Read the story excerpt first.   Be aware of the images that it creates in your imagination and how it makes you feel while you are reading.

Then listen to the narration-only excerpt.  Pay attention to any difference you see in your mind or feel because you are hearing the story instead of reading it.

Then listen to the narration with music.  Does the music intensify the images and emotions in your imagination?  Does it tell you how the eagle is feeling? Did you get that same feeling from just reading the story?