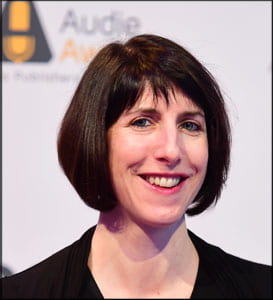 Michele Cobb, Executive Director of the Audiobook Publishers Association, agreed to do an interview about audiobooks for a feature article assignment for my Multimedia Writing/Reporting class at Palomar College. The feature article was posted on the s2m blog as “We’re All Ears for Full-Cast Audiobooks.”  She has graciously agreed to allow me to post her full interview from April 16, 2019 here.  Enjoy!

Michele Cobb: Full-cast productions have always been part of the audiobook world. In the tradition of the BBC radio dramas companies like LA Theatre Works, Full Cast Audio, Galaxy Press and Graphic Audio have been creating works in this tradition for decades. The full-cast productions by these companies often incorporate music and sound effects.  In the past few years, as the audio format has grown in scope in the publishing market, traditional book publishers who stuck to a single-voiced or non-interactive multi-voiced production previously are finding the room to experiment since sales revenues can support more complex and costly productions. These types of productions can also attract new listeners and press, so it makes them appealing to do in a variety of different ways.

Kathy: Radio dramas are experiencing a huge renaissance—both the old radio shows of the 30s and 40s and new, modern productions—due to podcasting.

Michele Cobb: The techniques used to produce full-cast audiobooks are similar to old style radio drama in many cases. What’s changed is the technology.  In the old days, everyone was together in the same room recording, and the Foley artist did the sound effects as part of the production. Today, actors can record separately, or the sound effects can be added as the digital world of sound files makes editing much easier. There is more rehearsal required when the group records together, of course.  The script preparation is key for any audiobook production and definitely in the case of full-cast audiobooks. Who is playing what role? What sound effects are being added? Are text alterations being done to remove “he said” or directions like “he said angrily”?  All of this must be carefully laid out in advance and then crafted by the director in a way that is not required in a single-voiced record.

Kathy: Radio drama scripts use a specific format that cues the listener about the environment, which characters are speaking and what actions are being done (sound effects also help with these cue).  Novels are not written to cue the listener in this way.

Michele Cobb: It depends. Some books are rewritten [we would consider this a dramatization of the book]. In the case of audiobook rights, one must have obtained the right to do this type of adaptation. Sound effects and music can be added, but re-writing a book makes it a different property. Many full-cast productions being done today are original works that are crafted specifically for this format.

Kathy:  In David Ciccarelli’s 2014 article, “Using a Full Voice-Over Cast vs. a Single Narrator for Audiobook,” best-selling author Anthony B. Howard said, “The new ‘Facebook generation’ wants experiences to be vibrant, diverse, engaging, and interactive. Listening to one person for 22 hours can be exhausting. . . Millennials are more likely to gravitate to the dramatic experience of listening to a multiple cast of characters.”

Michele Cobb: With audio in general (both through podcasts and audiobooks) on the rise and more people trying it and regularly listening, there are a wider range of tastes to appeal to and for whom to create content. It’s not cost effective for every book to be done as a full-cast recording, so publishers are experimenting to see what works for them and for the audience. Not everyone likes a full-cast recording and not everyone likes a single voiced recording, so by offering some of each, there are choices. With 46,000 audiobooks produced in 2017, there is room for a little bit of everything.

Kathy:  Radio dramas are often called “Theater of the Mind.”  In Bob Leighton’s 2015 article, “Theater of the Mind Makes for Great Radio, Ads and Broadcasts,” he states: “theater of the mind is a powerful thing . . . . With radio, the listener imagines . . . and by imagining, participates . . .  And their imagination isn’t limited to visuals or images – but rather extends far beyond into to feelings, emotions and all other senses.”  The radio drama format enables listeners to experience immersion and transference more thoroughly.

Michele Cobb: In my mind, either audio experience can create immersion in the story. They are different experiences, and finding the best experience for making the text available in audio is part of the art of creating great audio products. There are some titles that lend themselves beautifully to a single -voiced recording, but an adaptation of the same story into a full-cast recording can be equally as compelling if it’s done well. Publishers carefully consider how they want to record a particular title that best suits the story. And, it doesn’t mean that it can’t be done in two ways equally well. Neil Gaimen’s The Graveyard Book is a good example–different but great as either the single voiced record or the full-cast production. Storytelling existed as an oral tradition long before the printed word came about and when listening to audio these days we get the opportunity to have the storytelling experiences of our ancestors delivered to us in the way that we prefer anytime and anywhere. That’s exciting!

Michele Cobb has served on the Audio Publishers Association (APA) board since 2001, as a director and officer, and is currently Executive Director. She is a partner at Forte Business Consulting, which provides PR, Sales, Marketing and Business Development services for the publishing industry, and she is Publisher of both AudioFile Magazine and MMB Media, as well as Audio Publishing Director for LA Theatre Works.

Formed in 1986, the Audio Publishers Association (APA) is a not-for-profit trade association that advocates the common, collective business interests of audio publishers. The APA consists of audio publishing companies and suppliers, distributors, and retailers of spoken word products and allied fields related to the production, distribution, and sale of audiobooks.

©2019 by Kathy Matthes. All Rights Reserved.